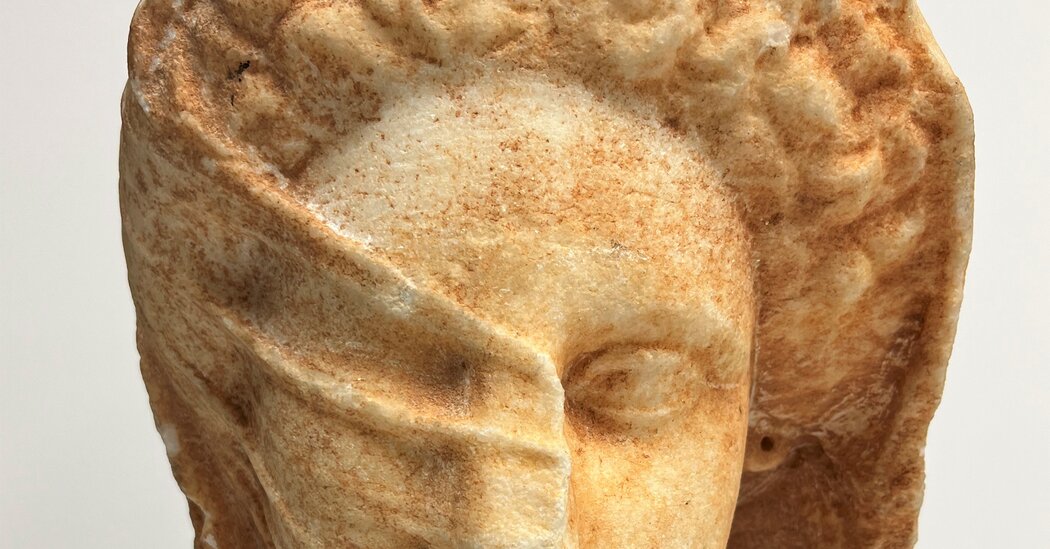 Looters and vandals have for decades destroyed Cyrene, a coastal city that was once an ancient Greek port and is now part of Libya. Two proceeds of the looting, marble busts stolen from the city’s famous cemeteries and recently seized by investigators, were returned to Libya on Wednesday by the Manhattan District Attorney’s Office.

The more important of the two objects, a mourning sculpture of a veiled woman’s head dating from 350 BCE, when the area was a Greek colony along the Mediterranean, had until February been on loan to the Metropolitan Museum of Art . Worth around $470,000, officials said it was seized from the Met in February after having been there since 1998.

Although investigators said it was necessary to keep the ancient bust’s recent history vague, they said they were able to identify the grave from which the object, ‘Veiled Head of a Lady’ , had been taken – one located at the necropolis at Cyrene, near present-day Shahat, Libya.

The region of Cyrene is a UNESCO World Heritage Site, a site that suffered heavy looting in the 1980s and 1990s. UNESCO said scientific work that was underway at the necropolis in the 1990s was halted in because of unrest and government instability.

Many artifacts stolen from Cyrene were statues and busts of women, veiled in a popular Hellenistic style. In December 2019, for example, the Department of Homeland Security seized a veiled female funeral statue from a Manhattan gallery that had listed it for sale online for more than $500,000. That same year, the department returned to Libya another bust of a veiled woman that had been seized from a drug dealer in Queens in 2008.

Investigators said the bust seized from the Met was smuggled out of Libya and into Egypt by Emile Saad, who was convicted in 2000 in Egypt of trafficking in antiquities and has since died. They say it appeared on the international art market in 1997 showing “telling signs of looting such as dirt on the surface and new chips at the base and in the veil”. He was loaned out to the Met the following year

The second object returned to Libya on Wednesday, “Bust of a Bearded Man”, worth around $30,000, had been circulating on the art market for decades and was seized this month, but the investigators did not reveal from where.

Manhattan District Attorney Alvin L. Bragg Jr. said in a statement that the artifacts are “windows into thousands of years of culture and deserve to be returned to their homelands.”

Choosing a pub near you is a red flag? have a grip

Discovery of a forest full of mysterious giant prehistoric jars