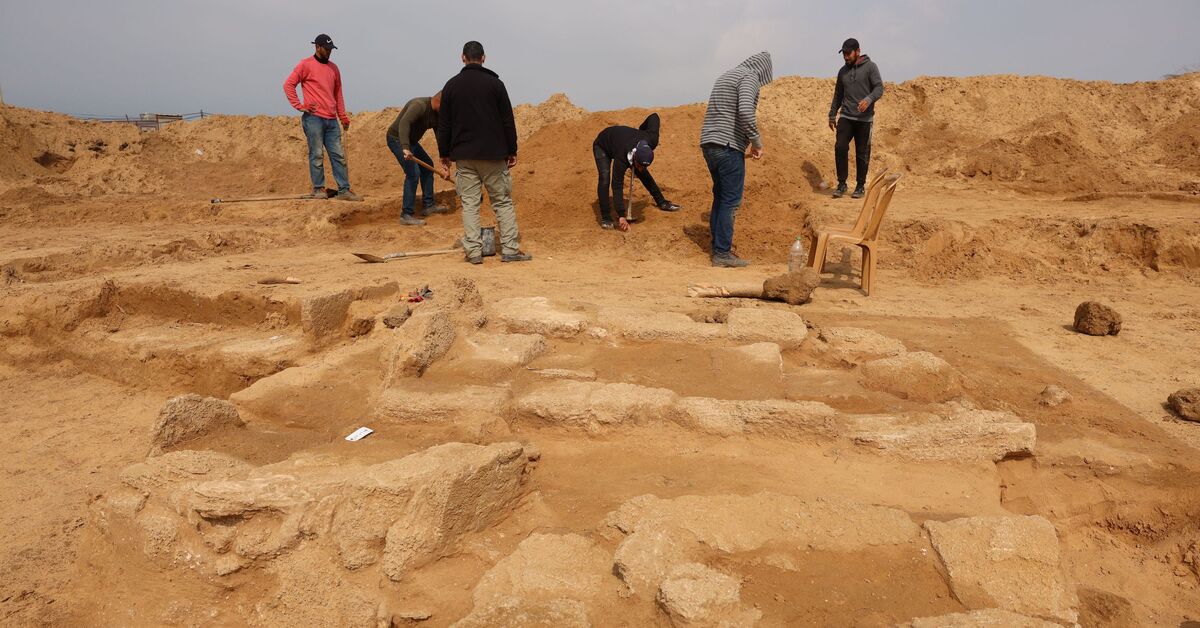 GAZA CITY, Gaza Strip – On April 4, Palestinian security services in the West Bank were informed that a group of antiquities thieves had carried out illegal excavations in the town of Sara, west of Nablus Governorate. Staff from the Ministry of Tourism and Antiquities, along with members of the city’s preventive security service, immediately went there.

Inspections by ministry staff on site revealed that the thieves had discovered a tomb dating from the Roman Empire in Palestine. The thieves had opened a large hole in the lid of the coffin found in the tomb and looted numerous artifacts from the site.

The thieves had also stolen a valuable ancient blue stone. According to information obtained by Al-Monitor, three people who live near the site are currently under investigation and have already confessed to searching and sabotaging the site.

The head of the Nablus Antiquities Protection Department affiliated with the Ministry of Antiquities, Mofeed Salah, who inspected the archaeological site, expressed regret for the damage caused by the arbitrary excavations.

He told Al-Monitor that the thieves damaged the surface of the coffin. “The coffin bears precious inscriptions. When the thieves tried to open it, they had to punch a hole in the lid. Given the narrowness of the area in which they were working, the thieves were forced to break part of the coffin.

Salah said the tomb had never been opened before. “According to our first estimates, the stone sarcophagus at the site belongs to a person of a very high social class, and it is known that the ancients buried their dead with their belongings.”

This Al-Monitor correspondent asked Salah how the thieves discovered the location of the tomb given that the ground surface during the excavation did not suggest the existence of an archaeological artifact.

Salah said investigations reveal that some of Serra’s thieves worked for Israel. “Many Palestinian sites have been damaged and sabotaged due to arbitrary excavations. Some people who work for Israel have information about the location of archaeological sites; they employ low-wage Palestinian laborers to dig up the sites and loot the artifacts so they can be sold or moved out of Palestine.

Hassan al-Jamal, head of the Department of Tourism and Antiquities Police, told Al-Monitor that the police work continuously to pursue the attackers who loot Palestinian antiquities. “The attack on archaeological and heritage sites in Palestine undermines the human heritage that belongs to all of humanity,” he said. “According to Palestinian and international laws, it is our duty to protect these sites, keep them safe, and ward off looters and vandalizers looking to get rich quick.”

Jamal, who monitors cases of archaeological theft as part of his job, confirmed that most looted antiquities are smuggled overseas.

“Israel’s control over crossings and outlets allows thieves to smuggle antiquities overseas since, under Israeli lawIt is legal to take antiques Out of the country [through sales]. Meanwhile, Palestinian law prohibits the falsification, trade and display of antiquities. It prohibits all Palestinian citizens from obtaining an excavation permit.

Archaeologist Jihad Mustafa said antiquities theft was widespread in the West Bank. “Palestinian antiquities were subject to numerous acts of destruction and theft until the advent of the Palestinian Authority (PA) in 1994, which took it upon itself to reduce theft antiques,” he told Al-Monitor.

Mustafa said that the areas most prone to theft and violation today are located in the area classified as Area C (under the full control of Israeli security and administration). “About 62% of archaeological sites in these areas are victims of theft, with the PA running out of powers to protect them.”

Mustafa pointed to the almost daily arrests by the Tourism and Antiquities Police of numerous thieves, denouncing the Israeli offenses against Palestinian antiquities despite the fact that international law and the 1954 law Haye Convention prevent him.

He added: “The Israelis have destroyed many antiquities, and they are carrying out illegal excavations in archaeological sites – many of them behind the separation wall.