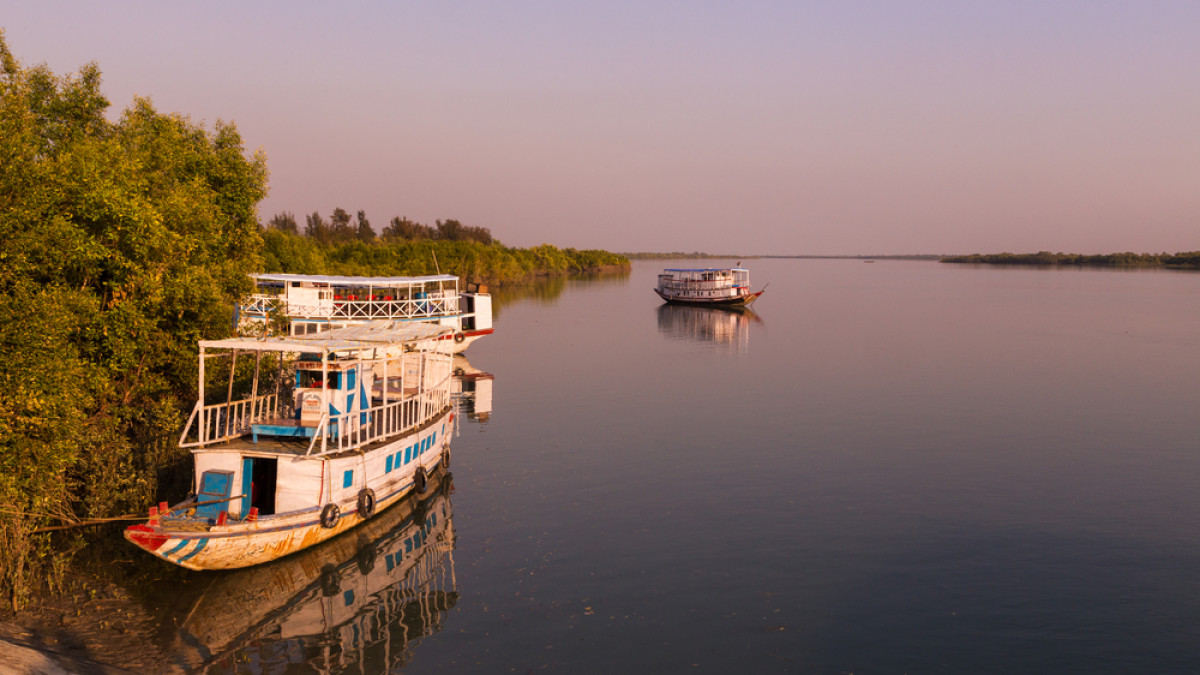 As glorious as Kolkata can be, the city can sometimes make you feel claustrophobic. So go ahead, go to the coast, or do a mangrove trail, or explore the paradise of Tagore…

Call of the Wild at Sunderbans

Declared a UNESCO World Heritage Site in 1997, the Sunderbans cover 4,000 km² in India and another 6,000 km² in Bangladesh, making it the largest mangrove forest in the world. The vegetation here is a unique mix of trees and shrubs that have adapted to their saline coastal habitats such as pneumatophores that have modified roots that grow out of the water’s surface so they can breathe. Look for iridescent fiddler crabs, amphibious fish like mudskippers, water monitors, alligators, deer, wild boar and adorable Irrawaddy dolphins. The delta is a paradise for birdwatchers who enjoy spotting egrets, sandpipers, plovers, kingfishers, herons. Some may even have the rare chance of spotting the migrating Asiatic Dowitcher. But the region’s most famous resident is the Royal Bengal Tiger. Tigers have adapted to the environment and can survive in salt water, swim and eat fish and other seafood.

The best way to explore the region is with one of the cruises organized by WBTDC. For example, the MV Chitralekha and the MV Sarbajaya which offer a stay on board with meals. The four-deck luxury cruise ship, MV Paramhansa, stops at several sites like Lothian Island, Bhagabatpur Crocodile Park, Burirdabri and Sajnekhali Forest Range. The pandemic is said to have affected many of these services, so check once before making any plans.

Sunset on the beaches

West Bengal has several beautiful beaches along its coast where you can enjoy sea and sand, water sports and stories around bonfires. There is Mandarmoni in the East Midnapore district with a 13 km beach and big red crabs. Tajpur beach has a dense casuarina forest while Shankarpur beach is a regular fishing port. The most famous beach is of course Digha where family vacations are a regular affair for Kolkatans!

Just three hours away by train, Shantiniketan was envisioned as a university town with an alternative vision of education by Nobel laureate, poet and artist Rabindranath Tagore. Today, Visva Bharati University attracts students from all over India and abroad. Spend time on campus exploring Tagore’s vision. Start with the Uttarayan complex which houses the five houses, each with distinct architectural styles, in which Tagore lived at different stages of his life. Many personalities have stayed there, including Mahatma Gandhi. At the Rabindra Bhavan or Bichitra museum, you can browse original letters, photographs, personal items and gifts that were given to Tagore during his travels. The delicate Upasana Griha (the prayer hall inside Uttarayan) is a wrought iron structure with magnificent Belgian glass windows. At the art college or Kala Bhavan, spend time admiring the paintings, murals and sculptures made by well-known artists such as Nandalal Bose, Somnath Hore and Ram Kinkar Baij. The Kalo Bari is an interesting structure made of mud and coal tar with black murals on its walls.

True to Tagore’s vision of preserving local crafts, Shantiniketan hosts weekly markets where you can buy pottery, the town’s distinctive leather goods, traditional textiles with kantha and batik work, terracotta and beautiful dokra (traditional technique of wax casting using an alloy) jewelry. Don’t worry if you miss the markets, there are plenty of shops in the town that you can visit, Amar Kutir being the best known of them.

The WBTDCL (West Bengal Tourism Development Corporation Limited) runs the Shantiniketan Tourist Lodge in nearby Bolpur where you can book your stay.

Stunning muted red terracotta temples gleam amid the resplendent green fields of Bishnupur. The temples, dating from the 17th and 18th centuries, were built with the local laterite soil by the Vaishnavite Malla kings to honor Krishna and his love, Radha. The detailed terracotta work on the temples, intricate carvings and stuccowork are unique, depicting dancers, Hindu myths and nature motifs. The curved roofs which sometimes give them a 2D look, the dramatic arches and the molded brick are a mixture of Bengali, Islamic and Oriya architecture. One of the most popular is the Jor Bangla Temple with the double curved signature and work depicting scenes from the Ramayana and Mahabharata. Before you go, see the 12.5ft Dalmadal cannon which was used in 1742 against the Maratha invaders from western India.

Bishnupur is also known to be a hub of several well-known handicrafts like Dashavatara playing cards and terracotta toys. Among the toys, the most famous is the long-eared Bankura horse which is also the symbol of Central Cottage Industries in India. Another famous handicraft is the royal Baluchari silk saree. It is inspired by temples, with intricate borders that have stories woven into them. You can buy Baluchari sarees in Kolkata at the State Biswa Bangla stores.