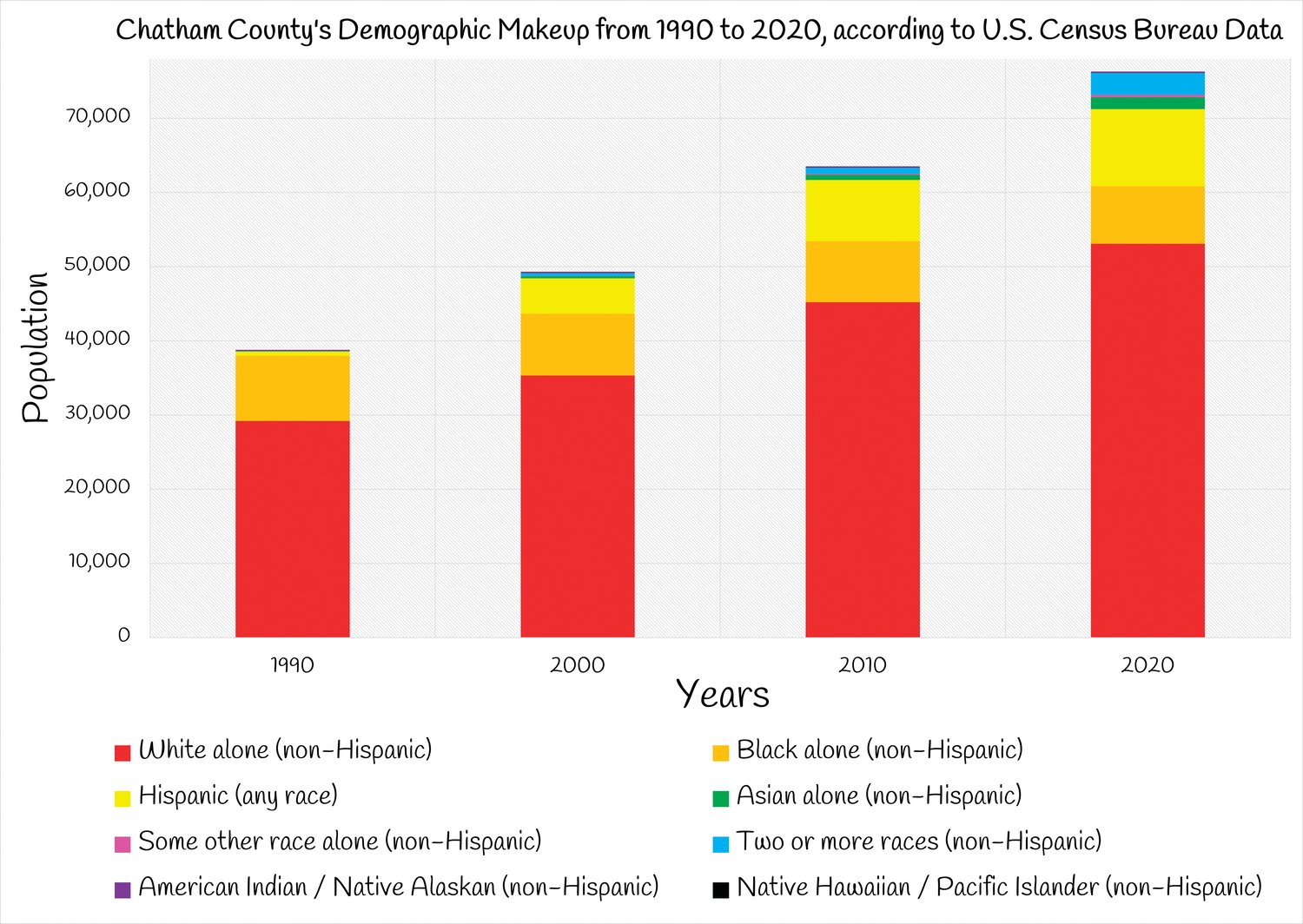 Five key demographic lessons to learn from the results of the Chatham U.S. census in 2020

Chatham County’s population grew by about 20% from 2010 to 2020, according to data from the 2020 U.S. Census – and just like the majority of the United States, most of that growth comes from Chatham’s minority populations.

The US Census Bureau began publishing detailed population statistics in mid-August; by mid-September, most of this data had become more readily available on the office’s website, data.census.gov. Using this data, along with data from previous censuses dating back to 1990, the News + Record has compiled five key points on Chatham County’s demographic trends in 2020:

In 1990, the population of Chatham County was approximately 75.3% White, 22.7% Black, and 1.4% Hispanic (all races). The other races made up less than 1% of the county’s population. The 1990 census did not identify individuals of two or more races.

Across North Carolina, the non-Hispanic white population grew by about 1.4%. In 2020, about 60% of the state’s population identified as white.

Chatham’s Hispanic population grew by a quarter from 2010 to 2020. It is now the largest minority population in the county.

Chatham County’s Hispanic population grew by about 26% from 2010 to 2020, according to 2020 U.S. Census data, overtaking Chatham’s black population as the county’s largest minority group.

In 2010, the U.S. Decennial Census found that 8,228 Chatham residents, or 13 percent, identified as Hispanic / Latino, a 73.5 percent increase in population from 2000, when the overall Hispanic population of the county was just over 4,700.

In 2020, the census counted 10,372 Hispanic residents in Chatham County out of 76,285 people, or about 13.6% of the county’s population. In Siler City, nearly 51% of residents identified as Hispanic / Latino, while about 10.7% of Pittsboro residents are Hispanic.

Chatham’s non-Hispanic black population has steadily declined over the past 30 years.

For 30 years, the Decennial Census of the United States found that Chatham’s non-Hispanic black population was declining, albeit slightly. In 1990, the census counted 8,794 non-Hispanic black residents. In 2000, that number fell from a few hundred to 8,355, and then another hundred in 2010 to 8,272.

Chatham’s multiracial population experienced the highest growth rate between 2010 and 2020.

Chapelboro.com has partnered with Chatham News + Record to bring more Chatham-focused stories to our audience.