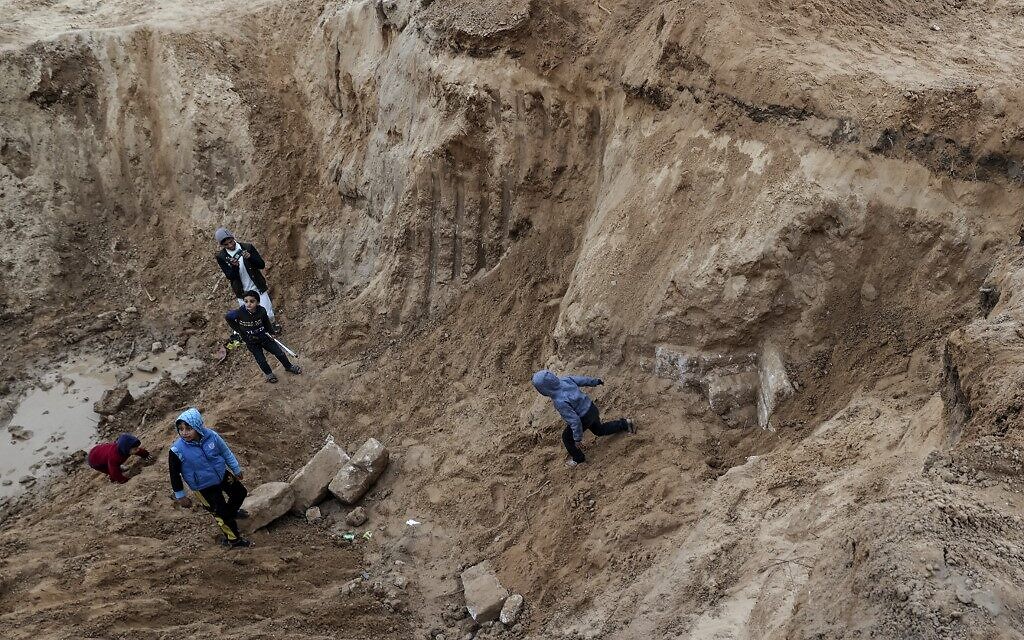 Bulldozers digging for an Egyptian-funded housing project in the Gaza Strip have unearthed the ruins of a Roman-era tomb, Hamas authorities said Monday.

The Palestinian Ministry of Tourism and Archeology said its teams had seized items found in the tomb and called for construction work to stop. An independent archaeologist, however, said photos he had seen suggested the site was a cemetery rather than a tomb.

According to local media, people, some of whom use donkey carts, looted numerous artifacts from the site northwest of Gaza City. Locals said archaeological items including coffin covers and engraved bricks were found a week before the ministry’s announcement.

Gaza, a coastal enclave home to over 2 million people, is known for its rich history stemming from its location on ancient trade routes between Egypt and the Levant. But decades of conflict and rapid urban growth in a cramped and crowded territory are among the reasons why most of Gaza’s archaeological treasures have gone unprotected.

An independent archaeologist briefed on the matter said photos suggest the site was a cemetery dating from the late Roman to early Byzantine period 1,600 years ago.

“They indicate that a Roman temple or a Byzantine church is nearby,” said the expert, who spoke on condition of anonymity because he was not authorized to comment.

A general view shows the construction site where an ancient cemetery dating back to Roman times was unearthed, in Gaza City on January 31, 2022. (Photo by Mahmud HAMS / AFP)

Last week, authorities from Hamas, the terror group that forcibly took control of Gaza from the Palestinian Authority in 2007, sponsored the inauguration of a 5th-century Byzantine church that has been restored by organizations local and international non-governmental organizations as a museum.

But in 2017, the same authorities destroyed large parts of a 4,500-year-old Canaanite settlement to pave the way for housing projects for their own employees.

During a global pandemic, a small country produces research that helps guide health policy around the world. How effective are COVID-19 vaccines? After the first two injections, does a third dose help? What about a fourth?

When The Times of Israel began covering COVID-19, we had no idea our little beat would become such a central part of world history. Who could have known that Israel would be the first at almost every step in the history of vaccination – and generate the research so urgently needed today?

Our team covered this story with the rigor and precision that characterizes Times of Israel reporting on all topics. If it is important to you that this type of media organization exists and thrives, I urge you to support our work. Will you join the Times of Israel community today?

Already a member? Log in to stop seeing this

Are you serious. We appreciate that!

We’re really glad you read X Articles from The Times of Israel over the past month.

That’s why we come to work every day – to provide discerning readers like you with unmissable coverage of Israel and the Jewish world.

So now we have a request. Unlike other media, we don’t have a paywall in place. But since the journalism we do is expensive, we invite readers to whom The Times of Israel has become important to support our work by joining The Times of Israel community.

For just $6 a month, you can help support our quality journalism while benefiting from The Times of Israel WITHOUT ADVERTISINGas well as access to exclusive content available only to members of the Times of Israel community.

Already a member? Log in to stop seeing this