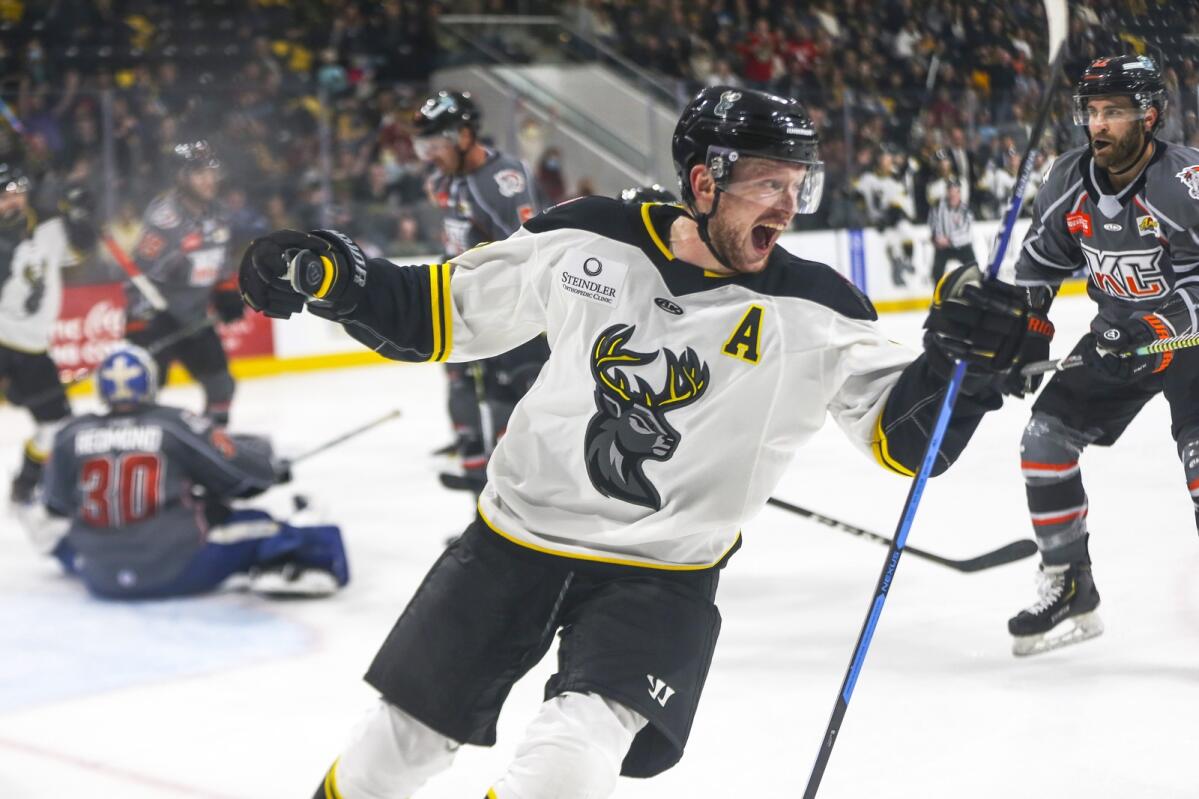 Ryan Kuffner of the Iowa Heartlanders celebrates a goal Friday night in his team’s 7-4 win over the Kansas City Mavericks at Xtream Arena in Coralville. (Geoff Stellfox / The Gazette)

CORALVILLE – It’s a bold venture, of course, to put a professional hockey team in a relatively small market with a large university, daring to offer 36 nights of nothing-involving sports called the Iowa Hawkeyes.

You can’t assess the long-term prospects of the Iowa Heartlanders on its opening night, but what you can say for sure is that the 4,017 people in the 5,100-seat Xtream Arena on Friday night were enjoying the new kid in town.

They immediately adopted the Heartlanders as their own, cheering them on hard and having no time for those wretched miserable wretches known as the Kansas City Mavericks.

The excitement immediately rose when the home team’s Ryan Kuffner, a Princeton graduate who played in Germany last year, scored 25 seconds into the game.

Pro hockey, like in ECHL, had arrived here. Now we’ll see if the crowds keep returning to the all-new Iowa River Landing Arena.

Friday’s crowd was made up of hockey fans who traveled a distance to get here and local newbies to the sport.

“I can’t believe how fast they are,” I heard a member of Group 2 say. Before the game, the people in the first group could have told them that was what they would witness.

“It’s fast and physical,” said René Perez, who drove 4.5 hours to Coralville with his friend, Jennifer Van Velzen. Both are from Independence, Missouri, the city outside of Kansas City that is home to the Mavericks.

Both wore Mavericks jerseys. One had the name “Thelma” on the back, the other “Louise”.

“We’re going to be around 50 here,” Van Velzen said ahead of the game, and of course the Mavericks were well represented.

Is this what’s going to happen in Iowa City-Coralville, with people enthusiastic enough about the Heartlanders to follow them to other ECHL outposts like Kansas City and Kalamazoo?

First, the team needs to be loved by the public enough to fill its own arena. So far, so good.

“We’re going to have to put a competitive product on the ice and continue to refine our entertainment product (between periods and during downtime). We will work hard to achieve this and try to carve out a niche in the market.

The arena is perfect for this. Every seat is close to the action. Concession booths and restrooms can be found near each seating section.

“It’s great to see River Landing packed,” said Dr. David Gugliano of Coralville, a hockey fan wearing the Heartlander jersey whose Family Dental Center is in partnership with the Heartlanders. “Between the Hawkeyes and that, it will be a fun winter. I think it will be a slow burn with people once it happens here. “

Many people present on Friday had already caught the burn. At least eight different NHL teams had their jerseys worn by fans, as well as the late Quad City Mallards, a minor league team that fascinated the Quad Cities two decades ago.

Presumably everyone wearing Cedar Rapids RoughRiders jerseys were at the Cedar Rapids Riders game at the same time as this one. Their Friday crowd at ImOn Ice Arena was 1,232. The Riders are back after being cut short last season due to derecho damage to the arena.

The Riders franchise has been enduring, dating back to 1999, but has never had a hockey competition in its market until now. The Heartlanders and Riders will play the same night 14 more times by April.

Winter sports in Iowa City-Coralville, however, mean men’s basketball, women’s basketball, and Hawkeyes wrestling. The former still draws five-figure crowds, and the latter two have a big preseason buzz and two years ago, their most recent season with fans allowed to attend.

Does that leave enough room for the Heartlanders? It may be fair. At a point where some fans left the arena on Friday, a security person thanked them for coming and asked if they had had a good time.

The responses have been overwhelmingly positive, with people assuring him they would come back.

Dash, the Heartlanders mascot greets the children as he leaves the rink on Friday, October 22, 2021 at Xtream Arena in Coralville, Iowa. (Geoff Stellfox / The Gazette)

Lennon Henrich and his father Zac react to a scuffle on the ice during their first hockey game, Friday, October 22, 2021, at Xtream Arena in Coralville, Iowa. (Geoff Stellfox / The Gazette)