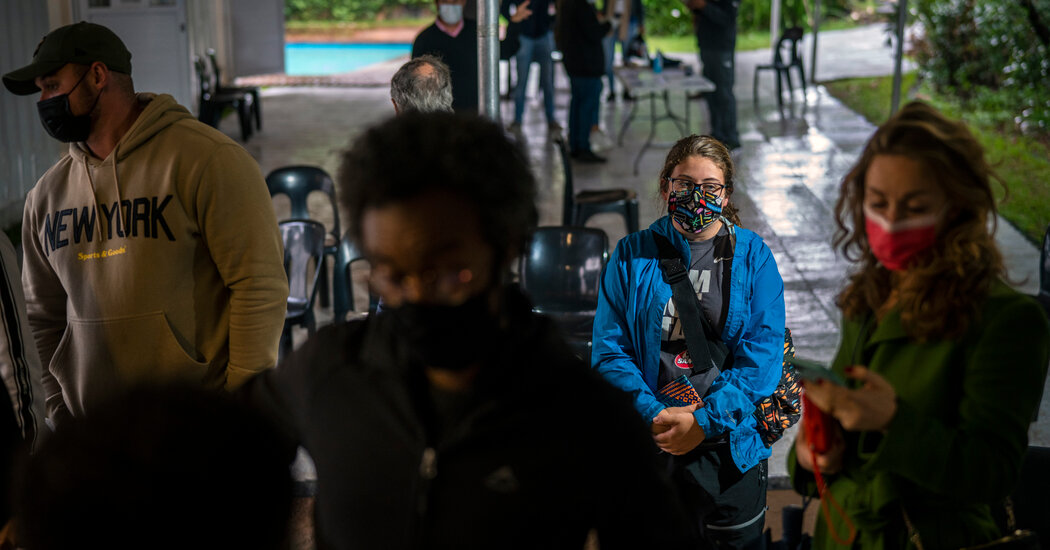 (Want to receive this briefing by email? Here is the register.)

Here are the best stories of the week and a glimpse into the future.

1. A new variant of the coronavirus has the world on edge: Omicron.

Countries around the world are scrambling to stop the spread after the WHO described Omicron as a “variant of concern”, its most serious category. The WHO said the variant, first detected in southern Africa, carries a number of genetic mutations that could allow it to spread rapidly, possibly even among those vaccinated. But scientists say vaccines seem likely to work against it.

Omicron has already been spotted in Hong Kong and Belgium and may well be in other countries outside of Africa. Germany, Italy and Britain reported cases yesterday. African officials have castigated the new travel bans, saying the continent was once again under the brunt of panicked Western countries’ policies and that the hoarding of vaccines had helped pave the way for this crisis.

2. Democrats struggle to energize their base despite big wins.

Even as President Biden wins victories like the bipartisan $ 1 trillion infrastructure bill, Democrats have warned that many of their staunch supporters see inaction on key party priorities such as voting rights, immigration and criminal justice reform. This has left the party base dissatisfied and demotivated ahead of next year’s midterm elections.

Growing frustration has reignited a debate over electoral strategy that has raged within the party since 2016.

Biden’s approval ratings slipped in the mid-1940s, even though virtually all of his legislation enjoys majority support in the same surveys. Nate Cohn explains the disconnection.

3. Israel and Iran have been engaged for years in a secret cyber war against each other’s army. Now the shadow war is spreading and striking millions of ordinary citizens.

In recent weeks, a cyberattack on Iran’s fuel distribution system has crippled the country’s 4,300 service stations. It took 12 days for the service to be fully restored. Days later, cyber attacks in Israel hit a major medical center and a popular LGBTQ dating site. The latest attacks are believed to be the first to cause widespread damage to large numbers of civilians.

As hopes of a resumption of the Iran nuclear deal fade ahead of talks due to start in Vienna tomorrow, such attacks have only proliferated.

4. Hondurans go to the polls for what could be their country’s most important elections in over a decade.

Voters will choose a new president, a political contest that has been marred by violence and is closely watched in Washington. Polls show a close race between Nasry Asfura, 63, a charismatic mayor, and Xiomara Castro, the leader of a major protest movement and the wife of a former president. If elected, she could become the country’s first female head of state.

The result could have ramifications for the Biden administration, which focuses on controlling immigration and fighting corruption in Central America.

In Brazil, Former President Luiz InÃ¡cio Lula da Silva has fought off a flurry of corruption cases and is planning a comeback ahead of next year’s presidential race.

6. For years, Uber’s intelligence service has acted behind the scenes. Then, a former employee accused his colleagues of illegal activities.

Uber, like many other tech companies, has recruited a team of former CIA officers, law enforcement officials and cybersecurity experts to gather intelligence on the threats and competition the company is facing. confronted. But in 2017, one of the team turned on the others, accusing them of stealing trade secrets, bugging and destroying evidence. Four years later, he reconsidered the allegations and admitted they weren’t true.

Drowned in other scandals, Uber had denied the allegations, but failed to set the record straight on behalf of the intelligence team. Some of the men involved spoke to The Times about this chapter of their career and its aftermath for the first time.

7. Brian Shelton may be the first person to be cured of type 1 diabetes. Diabetes experts were astonished but urged caution.

Shelton was the first patient to receive an infusion of cells grown in the lab that produce insulin. Now her body automatically controls her insulin and blood sugar levels. The study is continuing, but the results so far have given experts hope for the 1.5 million Americans living with the disease.

8. From turkey to latkes.

Chanukah starts tonight, and while there will be plenty of potato pancakes this week, Joan Nathan suggests this matzo dumpling stew. During his long career as a writer on Jewish cuisine, Nathan has focused on finding lost recipes. But the inspiration for this recipe came from a group of mothers sharing recipes in the playground. We have lots of other recipes, too much.

9. As winter approaches, there is at least one place where plants will still grow: a terrarium.

These miniature landscapes allow you to expand your collection of houseplants far beyond the typical houseplants. The first thing to keep in mind when building your own is that the same rules that apply to maintaining your garden outdoors apply to these miniature gardens, writes our gardening expert Margaret Roach.

You’ll know you’ve built a good terrarium when “you feel the ‘I want to live here’ in your chest,” said one terrarium designer.

For more inspiration, these aren’t your traditional holiday wreaths. T Magazine spoke to a new generation of florists who make garlands from dried flowers, herbs and herbs.

Sherrie Hewson, 71, had to quit the dating app because she was bombarded with explicit photos