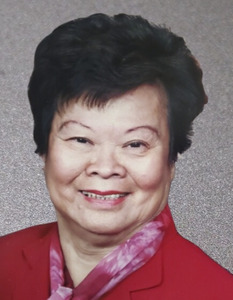 HIGH EARTH – Phung Sanh Do Ly, 76, of Terre Haute, Indiana, passed away peacefully in her sleep at home on October 6, 2021. Phung was born on October 20, 1944, in Can Tho, South Vietnam, the daughter of Cam Truong and Sanh Do. Phung was an amazing daughter, sister, wife, mother and friend. Her remarkable life experiences and culinary skills touched many lives, mostly thanks to her loving heart, helping hands, ability to listen to others, enthusiasm, community involvement, and work ethic.
Phung was a smart and outstanding student in school and had a ten-year career as a high school math teacher in her hometown. She always dressed in her best clothes, makeup and hairstyle every day and became very popular with her classmates and students. In the summer of 1968, she caught the attention of Phon Ngoc Ly. After dating for two years, they married on January 28, 1969 and remained married for 52 years.
Phon was very fond of Phung, and together they miraculously survived immigration to the United States in 1979 with their four young children, Dean (9), Hong (7), Mai (4) and Duong (5 months). They considered themselves lucky because they could stay together as a family. With God’s blessing, the Lima Methodist Church and its members sponsored and welcomed them to the United States.
Phung was selfless, working tirelessly to provide opportunities for his children. Even after a long day at work, Phung still had a home cooked dinner for the family every night. She sewed clothes, tended the garden, made sure homework was done, and put her children to bed every night with a happy heart. Her proudest achievement is having all four children graduated from the University of Notre Dame, and of course, other graduate degrees! She gave everything of herself for her children to have a better life.
Phung first presented his famous Ms. Ly Eggroll over 40 years ago in LaGrange, Indiana, their first American hometown. Phung will be forever remembered for the best “whole world” eggroll of all who loved Phung. Many will remember that Phung hand grated hundreds of fresh cabbage heads to make thousands of spring rolls for the county fair or fundraiser. In 1982, it first sold three for a dollar. Recently, you can’t buy Ms. Ly’s famous Eggroll for less than two for five dollars!
In 1995, Phung and her husband Phon moved to Terre Haute, Indiana to open the Asian Market, a successful grocery and gift store, selling everything from live blue crabs and vegetables to frozen foods. and rice cookers. Phung and Phon have owned Asian Market in downtown Terre Haute for 26 years.
For over 20 years (since 2000), Phung has taught Asian cuisine and shared her favorite family recipes in her Ms. Ly cookbook. As an outstanding chef, Phung has also shared his inspiring passion for cooking with the community, both at the store during his monthly cooking classes and at private cooking events. Phung was always laughing and telling stories, often being distracted by cooking, as it was times like this, with her friends and around food, that Phung was happiest.
Phung is survived by Phon Ly, husband of 52, chemical engineer and first lieutenant of the South Vietnamese army (Terre Haute); and their four children, two sons and two daughters: Dean, architect, and Regina, wife and CPA, and their two sons, Marcus and Jason (Knoxville, Tennessee); Duong, MD, and Jessie, wife, and their two daughters, Elva and Kayla (Hagerstown, MD); Hong, real estate agent, and Mark, real estate agent, and their sons Connor and Cole (Park City, Utah); and Mai, OD, and Patrick, husband and MD, and Sophia and Eddie (Tucson, Arizona). Phung has three brothers: Chung Do (Indianapolis, Indiana) and Trun and Phat Do (Los Angeles, California). Phung has many in-laws, friends, nieces and nephews who love Phung so much!
Although Phung has joined his loving mother, Cam Truong, and grandmother, Chau Nguyet Thach, in Heaven, Phung will be sadly missed here on earth. So the next time you eat a pie or an Asian dish or give yourself away, know that Phung Ly is smiling at you and radiating his love on you. Phung Ly, may you rest in peace!
A celebration of the life of Phung Sanh Do Ly will be held on Monday, October 11, 2021 from 5:00 p.m. to 7:00 p.m. at DeBaun Funeral Home, located at 85 E Springhill Drive, Terre Haute, IN 47802; and online condolences can be left at [email protected]
www.debaunfuneralhomes.com