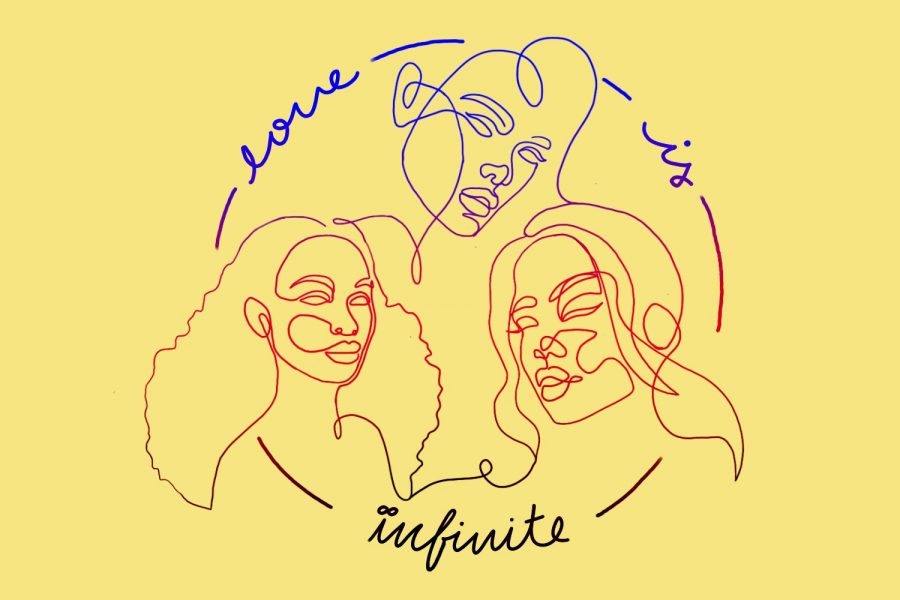 Moore first learned about polyamory in their late twenties when they discussed their constant relationship issues with their friend.

“I had an emotional connection and a physical attraction to other people,” Moore said. “That’s usually what happened in my monogamous relationships, and I felt a lot of shame and guilt about it.”

Their friend suggested that they discuss what monogamy meant to them and their partner.

“I said, ‘Wait what? That’s an option?'” Moore said. “All my life, I didn’t know there was an option other than monogamy.”

“I realized, ‘Oh, I don’t think I’ve ever been monogamous,'” Moore said. “I never felt good being with just one person. So, realizing there was another option, I thought, “I have to try this and see if it’s good for me.”

Moore talked about it with their monogamous partner at the time, and he didn’t feel comfortable with it.

“We have decided to end the romantic relationship but to continue being friends,” Moore said.

With the end of their monogamous relationship, Moore began her exploration of polyamory.

“I had poly friends and started dating one of them,” Moore said. “I also went to OkCupid, which was the main dating site at the time, and looked for people who had open relationships.”

“I spent a lot of time as a side chick,” Moore said. “Married people have opened up their relationships to me, and I’ve felt the sting of people pushing me aside or not treating me like a person with real feelings because they had a ‘real relationship to deal with.’ “

A relationship in their early thirties was the culmination of those early negative experiences.

“My partner had told me and his other partner about someone he met at school, he had just returned to college, who he wanted to start a relationship with,” said Moore. “I thought it was very poor judgment on his part because he was 30 and she was 19.”

This initial disagreement is what caused Moore and their partner’s relationship to spiral out of control.

“We had some pretty big conversations about power dynamics and how it was really inappropriate,” Moore said. “He revealed that they hadn’t had a conversation about it, agreed with me and told me he would end this relationship.”

Moore was pleased with this response and trusted his partner to deliver on his promise.

Two weeks later, Moore found out he was still dating her and failed to tell Moore and his other partner.

“He was lying to both of us about his involvement with this other person,” Moore said. “When I found out about this, I was like, ‘Oh, we’re done. I can’t trust you anymore. He had violated the relationship and sexual boundaries that we had established, and we were done.

This is one of the main reasons why communication in polyamorous relationships is so essential. Without good communication, people can be put at risk of STIs and other diseases and suffer immense trauma due to broken trust.

While these issues aren’t unique to polyamory, they can certainly put more people at risk.

“Polyamory forces you to communicate,” Moore said. “While this is true for all healthy relationships, problems can potentially arise more frequently. I have learned not to jump to solutions until I can identify my needs and fears in the given situation.

Now in their late thirties, Moore has realized that polyamory has taught them many other valuable lessons.

“Polyamory taught me to be a really independent, interdependent person,” Moore said. “We are a communal species. We need others, but we also need to be able to function on our own.

Polyamory taught me to be a truly independent and interdependent person,” Moore said. “We are a communal species. We need others, but we also need to be able to function on our own.

This need for human connection and community is one of the main factors that brings many people into polyamory in the first place. These large communities are called polyculesvast networks of connected polyamorous relationships.

“Once you enter a polycule, you start meeting a lot of people,” Moore said. “I found that many polythene houses become community centers that people use as gathering places for events and just a place where people have many common interests.”

“I have a much larger support network than ever before,” Moore said. “For about five years I was in an abusive monogamous relationship. This wouldn’t have happened if I was poly. I didn’t have anyone else. If I had other avenues of emotional support, friendship and other possible futures like I do in polyamorous relationships, I could have seen myself getting out of that relationship much sooner.

This sense of community is also just one of the many things Moore and many others appreciate about polyamorous relationships and consensual non-monogamy.

“It normalizes all kinds of intimacy,” Moore said. “I think it’s essential because it helps free us from Puritan and Victorian ideas of sexual intimacy and unhealthy relationships.”

Polyamory does more than just challenge old ideas about intimacy; it allows people to express themselves and connect more deeply with those around them.

“I like people,” Moore said. “As an extrovert, I feel like I meet really interesting, thoughtful, creative, really introspective people, and I’m able to have a deep connection with them through polyamory.”

This feeling of having an endless amount of love to give is common among many poly people.

He Asked A Girl Out After Matching Her Through A Dating App, But He Refused To Pay For Her When The Check Came – Chip Chick