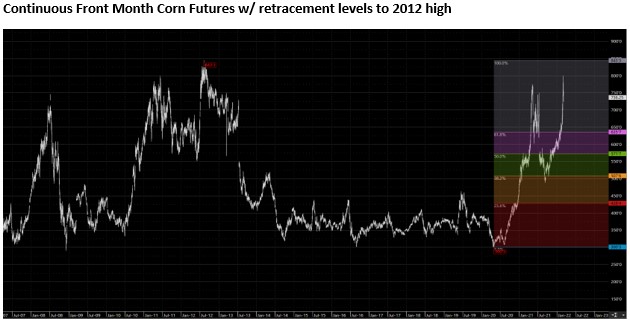 It was another mixed session today with corn dropping 15-20C at one point before reversing late in the session to close again. Wheat was the main catalyst for corn’s decline early in today’s session as KC and Chicago wheat both saw huge corrections, most likely as traders spread their positions so that the world is still trying to determine the impact of the Russian-Ukrainian conflict on global supply chains. . Even if a ceasefire were to be signed soon, it seems highly unlikely that Ukraine will come close to having all of its planted acres of corn. Ukraine produced 42 MMT of maize last year and it is estimated to export 33 MMT this year. With fighting around key ports and export limits likely to be put in place, that number is starting to look unlikely for old crop maize. Prior to the invasion, Ukraine had exported around 50% of this estimate.

Assuming Ukraine does not plant many crops, simple math would suggest that this should mean increased exports for the United States and Brazil. However, I think it is important to see to what extent China has been able to replenish state reserves and whether it will need to continue importing corn at historically large volumes. The corn to bean ratio has also returned to the purchase of late US corn acres, so it will be very interesting to see what is printed in the Acreage report at the end of the month, as well as how realistic the number is given the renewed concerns about inputs. the dispute.

In the technicals, looking at the continuous corn chart going back to the 2012 rally, we are currently about 80% retraced to the 2012 high of $8.43. March corn tested $8 on Friday, which turned out to be strong resistance on the move. A nearby corn close above $8 would put markets in sight of the 2012 high. Support for any selling is seen at $7 and beyond that at $6.92. Just to further illustrate the magnitude of the recent price spike following Russia’s invasion of Ukraine, corn futures could likely lose a premium dollar in this market and technically remain in an uptrend. which started last fall.

The balance has really shifted in recent weeks, with beans now taking over corn and wheat following the Russian-Ukrainian conflict. Soybeans struggled to find their footing in this commodity surge and turned sideways and restless. South American weather has also become an overlooked market driver by comparison. The weather has become less threatening, but the big question is what damage was caused by the drought in southern Brazil/Argentina in December and January. The Brazil harvest is now more than 50% complete.

Further South American production cuts look likely in tomorrow’s USDA WASDE report at noon EST. Private analyst estimates have dropped as low as 121 MMT which I have seen with the USDA still at 134 MMT. U.S. export sales had a strong month last month following SAM production reports and are currently above the pace needed to reach the USDA estimate of 2.05 billion grains exported this year.

In technicals, month ahead beans retested the $17 mark, with March beans managing to close above $17 for the first time since 1st of the month. May beans also traded above but could not hold the close. It will be interesting to see how the market reacts to tonight’s open. $17 was a tough resistance on the move. Looking at the chart for soybeans from the previous month, the bull day on the day of the Russian invasion of Ukraine put the beans over 90-95% retraced to 2012 highs, currently we’re sitting about 90% retraced to those highs with $17.94 the target on any move above $17. On the downside, support is seen at $16.50 and below $15.80-$16.20 should support the lows after the outbreak of wars in Ukraine.

Review: Lloyd Suh Recovers the Story of the Chinese Lady from the Annals of History