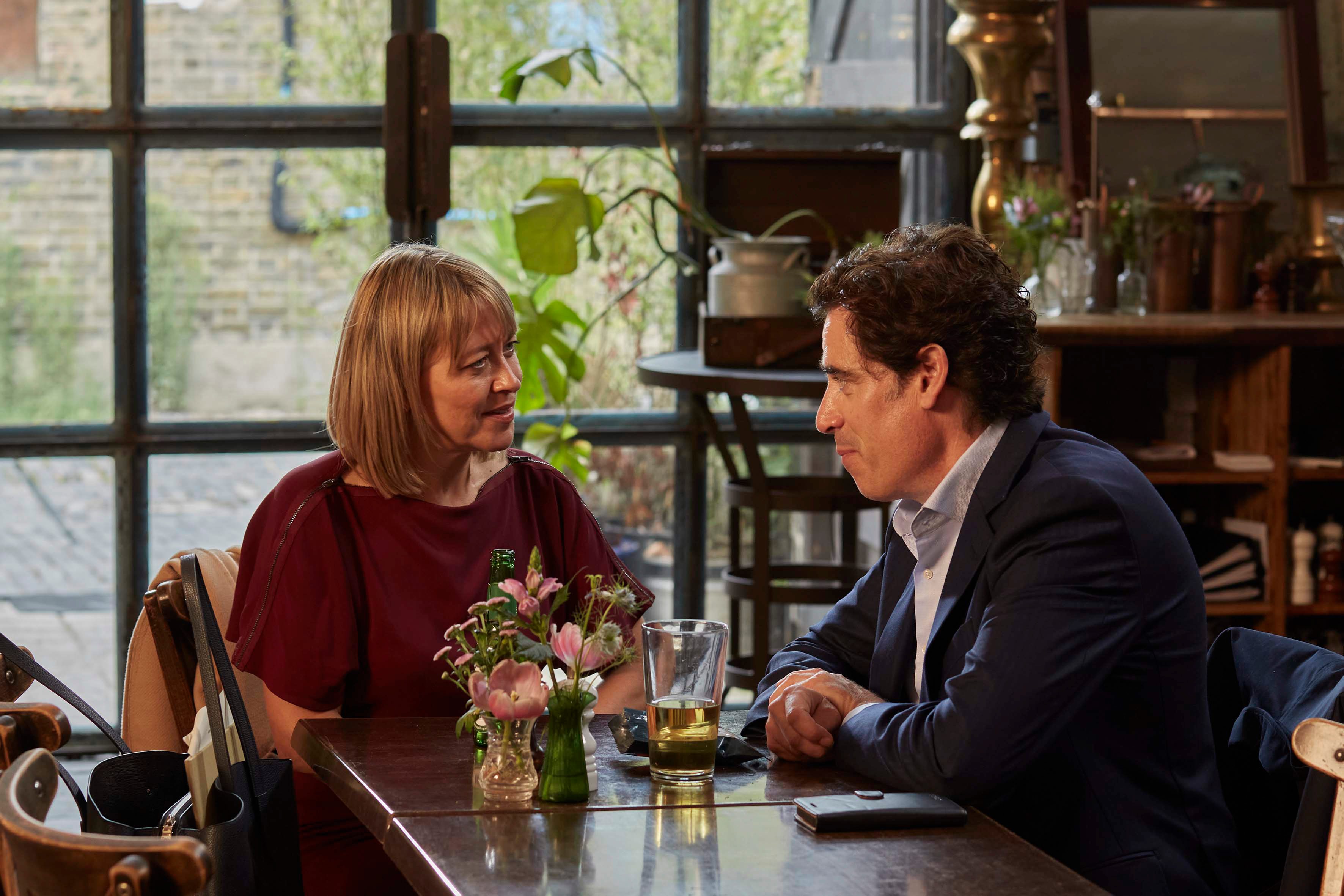 BBC drama series The Split returns in April for the third and final season of the popular divorce drama, as Nicola Walker’s central character Hannah, a family lawyer, faces her own bitter divorce following a an infidelity.

The main cast all return for Season 3, including Walker, Stephen Mangan (as husband Nathan), and Barry Atsma (as Christie, Hannah’s lover and co-worker).

The BBC teases a ‘shocking, game-changing revelation’ in the divorce proceedings, adding: ‘The battle lines are being redrawn, [and] their dream of achieving the “good divorce” is in tatters.

Read on for all the cast and characters in The Split season 3.

Who is Hannah? A high-powered divorce lawyer from the Defoe family, facing her own divorce this season after her seemingly rock-solid marriage fell apart in Season 2.

According to the season 3 synopsis: “As Hannah and Nathan begin to share their 20 years together, Hannah comes to terms with what she is about to lose and a shocking revelation changes the stakes dramatically.”

Where have I seen Nicola Walker before? She played DCI Cassie Stuart in Unforgotten and the title role in the recent TV adaptation of Annika. She also played Gillian in Last Tango in Halifax and performed in Collateral, Spooks, River, and as one half of the “Frightful Folk Duo” in Four Weddings and a Funeral.

Who is Nat? Hannah’s future ex-husband, who cheated on her in season one through an online dating site, pushing her into the arms of her new co-worker Christie, who was also an old flame.

Where have I seen Stephen Mangan before? He is best known for playing Sean Lincoln on Episodes, Guy Secretan on Green Wing, and Dan Moody on I’m Alan Partridge. He also starred in the Olivier-winning comedy Jeeves and Wooster and was nominated for a Tony for his role in The Norman Conquests. Other credits have included Richard Pitt in Hang Ups and the title role in Dirk Gently.

Who is Christy? A family lawyer and former flame of Hannah who also became her new colleague at Noble Hale Defoe following the big merger. The couple had an affair last season, leading to this season’s acrimonious divorce between Hannah and her husband,

The season 3 synopsis teases that, “adding fuel to the fire, the catalyst for the breakdown of Hannah and Nathan’s marriage, Christie (Barry Atsma), will also return in the series finale, which sees the wedding once solid of Hannah and Nathan coming apart as they try to reach an amicable separation agreement.”

Where have I seen Barry Atsma before? International viewers may recognize the Dutch actor as Peter van Syoc in The Rook, Arjen in Episodes (opposite The Split co-star Stephen Mangan) and Moreno in The Hitman’s Bodyguard.

Who is Ruth Defoe? Matriarch Defoe and mother of three daughters – Hannah, Nina and Rose – all of whom, except the youngest, are practicing divorce lawyers. She had a particularly rocky relationship with Nina in the past.

Where have I seen Deborah Findlay before? Viewers will recognize Findlay among Collateral (as Eleanor Shaw), Hampstead, Vanity Fair, The Lady in the Van (as Pauline), State of Play, Torchwood (as Denise Riley), and Cranford.

Who is Nina? One of the Defoe sisters, she is a divorce lawyer and self-destructive kleptomaniac who fell in love with one of her clients, comedian Rex, during season 1. The couple separated when he broke up. is back with his wife, but at the end of season 2 he made a surprise reappearance.

Where have I seen Annabel Scholey before? She recently starred in the BBC drama Salisbury and has previously starred in Britannia, Medici, Inspector George Gently, Walking on Sunshine and Being Human, in addition to Jane Eyre’s 2006 adaptation (starring Ruth Wilson and Toby Stephens) .

Who is Rose Defoe? One of three Defoe sisters, she eventually married fiancé James in Season 1, but continued to have second thoughts.

Where have I seen Fiona Button before? She played Jennifer Chambers in Grantchester and Tess Roberts in Lip Service, and appeared in You, Me and the Apocalypse, My Mother and Other Strangers and Foyle’s War.

Who is Zander Hale? Boss of the recently merged Noble Hale Defoe.

What else has Chukwudi Iwuji been in? He recently starred in The Underground Railroad and is also known for playing Dr. Eli Mays in Designated Survivor and Colin Moore in the hit Netflix drama When They See Us. He has also appeared in John Wick: Chapter 2 and Doctor Who. .

Who is Rex Pope? Comedian and former Defoe client Rex began a relationship with Nina earlier in the series. However, Rex ultimately decided to get back together with his wife and move the family to Los Angeles, leaving Nina behind. But in the last episode of season 2, he made a sudden reappearance.

What else has Mathew Baynton been into? Recent projects include the BBC comedy Ghosts (starring the amorous spirit Thomas) and Vanity Fair. Viewers of a certain age will also recognize him from Horrible Histories. His other projects include Yonderland, Quacks, You Me and the Apocalypse, The Wrong Mans, Will, Spy and the classic comedy Peep Show.

Who is Liv? Hannah and Nathan’s teenage daughter.

What else has Elizabeth Roberts been into? The actress played Clover Jenkins on an episode of Call the Midwife earlier this year, and also appeared on Casualty.

Who is Vinnie Stern? Hannah and Nathan’s son.

What else has Toby Oliver been in? He played Hayden in Dark Money, alongside Babou Ceesay and Jill Halfpenny. Toby Oliver also starred in Containment and played “Boy Roach” in the Black Mirror episode Men Against Fire.

The third and final season of The Split will begin on BBC One on April 4, 2022 at 9 p.m., and seasons 1 and 2 are available to stream on BBC iPlayer. Take a look at what else is on with our TV guide.

The latest issue of Radio Times is on sale now – subscribe now to get every issue delivered to your door. For more on TV’s biggest stars,listen to the Radio Times podcast with Jane Garvey.