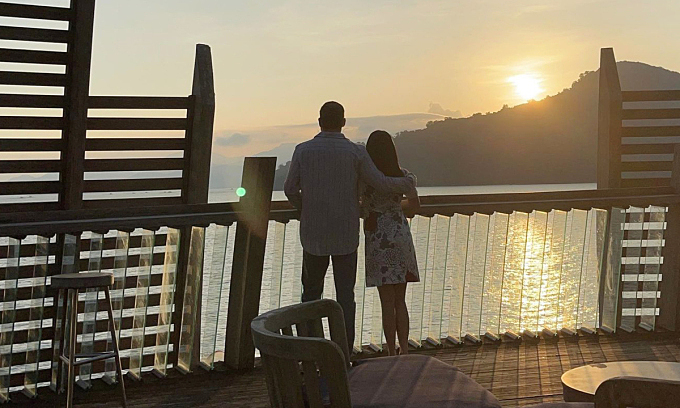 Vietnamese brides find out it’s not milk and honey overseas

When the girl from the northern province of Hai Duong graduated from high school, her family encouraged her to marry a foreigner.

She agreed because her two cousins ​​had married South Koreans and didn’t have to go to work after they got married. Yet they sent money to their parents and visited them every year.

When she arrived in South Korea, she realized she had been tricked. Her husband was a farmer in the countryside and not an architect.

Things got worse. She was not allowed to spend money, use the phone or go out, and had to do everything under strict supervision. Her grumpy and irritable husband constantly yelled at her and beat her.

Things got worse when she failed to give birth to a son like he wanted, and he treated her worse by the day.

She endured it for two years because she didn’t want her family to worry or her friends to laugh at her.

He beat her on New Year’s Eve in 2018 after she refused his sex request.

“He broke a picture frame of my mom and me and told me not to expect to come home without sons,” she sobbingly recalled.

She wanted out of here.

She managed to call a lawyer in Vietnam, Le Hong Hien, and disclose her situation.

After her appeal, Hien from the Hanoi Bar Association went to Hai Duong to collect her marriage documents, other evidence and filed for a unilateral divorce.

“It wasn’t just about divorce, it was about saving lives,” Hien says, adding that most Vietnamese women who marry through twinning don’t understand the law and think they can’t divorce someone. once they are married and their husbands keep their papers.

Van is one of thousands of Vietnamese women who have married South Korean men through matchmaking services.

Many live happily ever after, but there are also those who experience discrimination and abuse and even die at the hands of their foreign husbands.

A 2017 survey by the National Human Rights Commission of Korea found that more than 42% of foreign wives experienced physical, emotional, sexual and financial abuse.

The rate was only about 29% if the woman was Korean.

During her 10-year career, Hien has been involved in hundreds of divorce cases involving foreign couples, mostly Vietnamese women who got married through matchmaking in Asian countries.

“Most of them are disillusioned, having been tricked into getting married in remote rural areas where they have to serve their husbands and care for their elderly in-laws. In many cases, they are like maids.”

In recent years, the number of Vietnamese women marrying men from Taiwan, South Korea and Japan has increased.

According to statistics from the Ministry of Public Security, since 2008, about 18,000 Vietnamese citizens have married foreigners every year, 72% of whom are women.

The General Population Department said following a 2018 study that the number of Vietnamese brides in Taiwan and South Korea exceeded 170,000.

A few years ago, rural areas of South Korea began to face a gender imbalance, and the government encouraged men to marry through matchmakers, paying them 4 to 6 million ₩ if a Korean farmer was successfully married to a foreign woman.

But even women who marry for love and not for twinning find it difficult to enter into a multinational marriage in a new environment.

Phuong, 32, has been married to a Japanese man for five years, four of which were spent in Vietnam when they had a happy life.

When the couple returned to Japan after the husband’s contract expired in 2019, conflicts began to arise between them. He went from a sweet and calm person to an angry man and argued with his wife every day after he got home from work.

After a few quarrels, he kicks her out of the house one night, and even forbids her to see her child.

“I felt cheated and betrayed when my husband turned into another person,” says the wife from Hanoi.

She intended to divorce her as soon as possible and bring her child back to Vietnam.

On the sixth day, her husband came home from work, apologized to her, and suggested that the two sit down and reconcile.

During this time, their daughter fell ill with fever and diarrhoea. Phuong wanted to take the child to the hospital, but he refused.

She took her child to the hospital and then to a hotel to spend the night there.

“He tracked me using a GPS and told the police that I had abducted my child, which led to my daughter being taken to a child protection centre.”

The three-year-old girl was separated from her parents for three weeks.

Both adored their child and, for her, hoped to reconcile.

Phuong was not with her husband during this episode and had time to reflect on her marital relationship.

She could feel sympathy for her husband as he had to adjust to a new work environment and was under a lot of pressure to put food on the family table.

“I realized that one of the characteristics of Japanese husbands was that they often overthink things in a crisis,” she says.

After doing his own soul-searching, her husband apologized to her and offered several solutions to save the relationship, such as discussing all their worries, being clear about expenses, and making more friends to expand their social life.

Counseling sessions at the child protection center also helped alleviate some of her distress.

Linh Nhi, 31, from HCMC, once firmly believed she would only marry a foreign man as she was haunted by her overbearing patriarchal father who frequently whipped his wife and children. But after a few dates with Western men, she changed her mind.

“From my experience of dating two foreign men for a period of time, I have found that they are not loyal,” she says.

“When I went out with a Frenchman, he kept seeing lots of other girls”.

In 2018, she met and fell in love with an American, and they even planned to get married.

But they ended up going their separate ways because they couldn’t agree on how to handle the money.

They lived together, sharing all the expenses equally despite their engagement.

“He later told me he wanted a prenup before we moved to the United States, saying he would be the sole owner of his parents’ house when they died instead of sharing the property.

“I was offended. I had planned to accompany him to America for love and not for his money”.

Nhi, who works for a multinational company, says she decided to call off the wedding, fearing that the differences between them could be irreconcilable if they end up getting married and she could be stranded in a foreign country.

“Now I don’t care if my husband is a foreigner or [Vietnamese]”.

On forums and social media groups, “Western and Vietnamese men” is a very popular topic.

Nguyen Kim Oanh, author of the books ‘Yeu Di Dung So’ (Don’t be afraid to love) and ‘Lam Phu Nu Khong Kho Ti Nao’ (Be a woman without pain), says she frequently receives questions from women on this topic.

Hoang Anh Tu, a journalist and lecturer, says foreign men may be more gallant than Vietnamese, but if a woman marries just for that, she is doomed from the start.

“There are good and bad foreign men. Violent men can be of any nationality.”

A Vietnamese woman faces some uncertainty when marrying a foreign husband as she often does not know foreign languages ​​and cultural differences, especially when she is in a foreign country.

The reverse is also true of course.

For example, when a Vietnamese husband is scolded by his wife, he often laughs about it because it’s probably part of the marital landscape, but a Westerner might interpret it as an insult or abuse, Tu points out.

He is unambiguous in his opinion that women should marry only for love and not for other purposes such as foreign nationality for their children or because Western men are more gallant than Vietnamese.

Oanh, who is married and lives in Switzerland, says that in order not to be disappointed, women should consider men for who they are and not for their race, origin, skin color, job or religion.

“Of course, you can use these factors as a guide to see if he’s a good fit for you, but don’t use them to judge someone.”

Van returned home safe and sound a few months after being helped by Hien.

“You gave me birth again,” she told Hien when they reunited in Vietnam.

Indeed, on that New Year’s Eve, she desperately searched for phone numbers all over Korea and Vietnam, but only Hien answered the phone and advised her not to think about doing anything stupid.

Obama calls for tech regulation to tackle misinformation on the internet

Credello: how to protect yourself from love scams