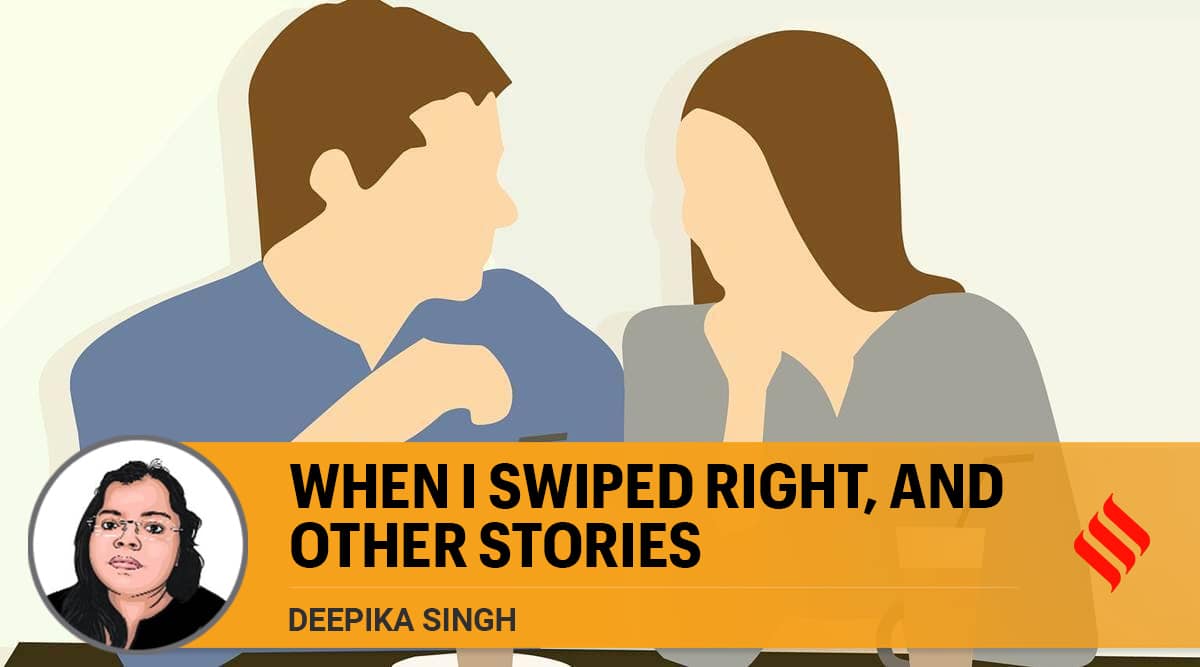 WHO FINDS love by swiping left and right?”; “Isn’t love an emotion that has to come to you organically?”; “But you don’t get murdered on Tinder?”

With these questions weighing heavily on my mind, I reluctantly took my first steps into the world of online dating three years ago.

I wasn’t expecting much. As a plus-size woman with features that don’t fit the conventionally attractive mold, I used to be ignored for romantic wedding rings. And on a platform where the first impression is formed from something as frivolous as a profile picture, what chance did I have? To my surprise, I found at least five matches in the first few minutes on Bumble. And that was the start of what was to be a defining moment in my personal history.

My first date was with A, less than 18 hours after we found out about each other. He was cuter than his pictures, an amazing listener, and a quintessential hug. It was the best first date I’ve ever had. We met again three days later. He said he wanted me to read poetry to him, I said I was quite a new person. We agreed on a short story. He rested his head in my lap as I read aloud. It was as romantic as it gets and completely surreal.

The best of Express Premium

My second date was with D; I connected with him through Hinge. “I find you very attractive,” he said. Now, those are words I had never heard said to me before. Already. I made him say “Deepika, you’re attractive” at least a dozen times and he agreed. He was nerdy, adorably goofy but alert to a fault, and resolutely focused on doing nothing that made me feel uncomfortable.

And then I met S. Gifted with a dry sense of humor, he cracked me up with every sentence. He was six years younger but with a higher IQ than all the guys I’d dated before, combined.

Three years, countless matches, and more than my fair share of dating later, if you ask me how I feel about my online dating experience, I’d say grateful. The men I met through the apps certainly turned out to be better people than those I had met “organically”. I stopped apologizing for my weight and realized that I was attractive in my own way.

Now the pitfalls: how can I meet a stranger like that? What if he was just a serial killer on the prowl? Well, I took my precautions. I mean sending pictures and contact details of the guy I’m meeting to my friend isn’t the kind of thing you consider on a first date, is it? But we do what we have to do.

And, how do I know he’s “the one” by scrolling through a few pictures and phrases that pass for bio? What if he’s handsome but not photogenic? What if his bio sucks but he could have knocked me down in person? And, dear lord, if there is no organic?

So in the end, can I say I’m a convert from a dating app? Ah, I wouldn’t commit. My idea of ​​meeting “the one” is still outdated – I’d give anything to run into him in a dusty old bookstore. And then he invited me for a coffee, maybe?

But unfortunately, and shamefully, I no longer go to bookstores. Along the same lines, I can’t remember the last time a coffee took my breath away.

With work friends being the only people I interact with throughout the week, and platonic girlfriends and friends occupying my days off, these dating apps, “inorganic” as they sound, are practically (game of words) my only chance to find “the only one”. I just hope he’s photogenic, has a sassy bio, and brings me right back. And that he’s not a serial killer on the prowl.