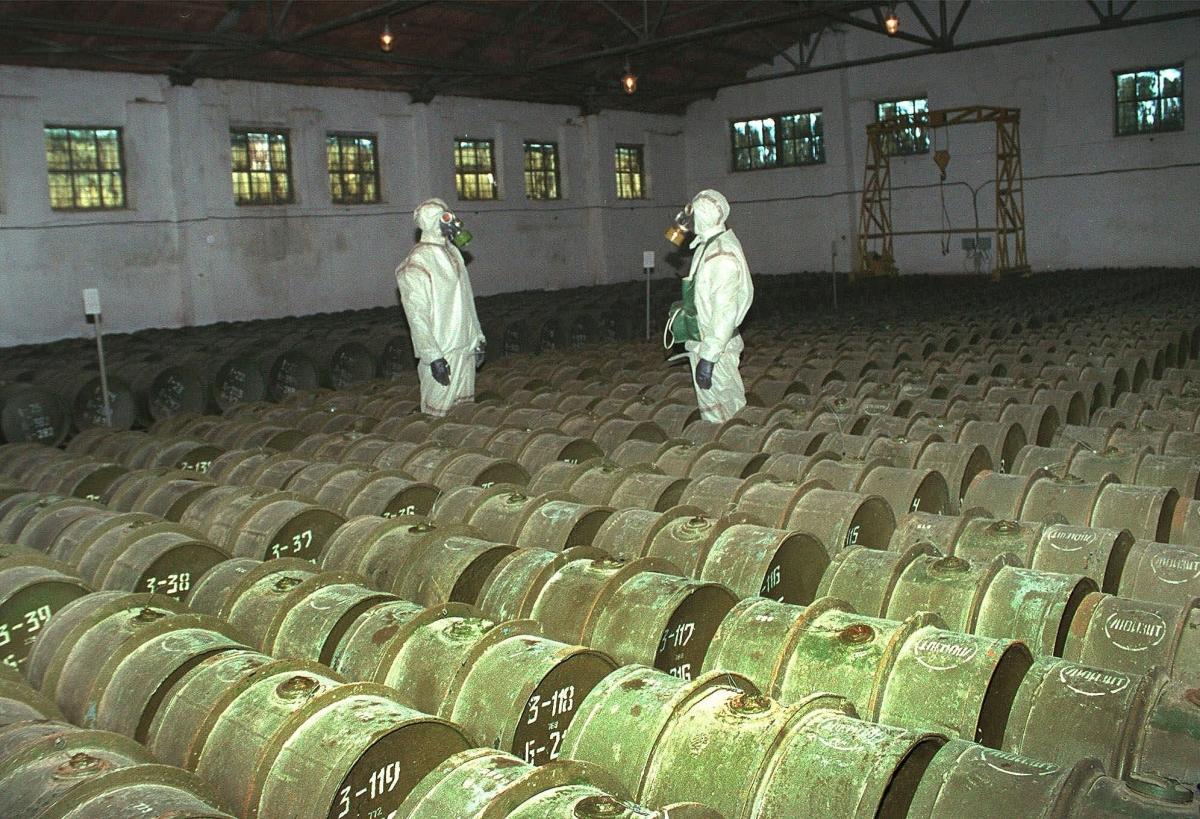 As Russia’s invasion of Ukraine enters its third week, the United States is closely monitoring any possible moves by Moscow on the use of chemical or biological weapons in Ukraine.

Washington accused Russia to falsely claim that the United States is working with Ukraine to develop a chemical and biological weapons program. “Russia has a habit of accusing the West of the very crimes that Russia itself is committing” State Department spokesman Ned Price said in a statement. March 9. “These tactics are an obvious ploy by Russia to try to justify further premeditated, unprovoked and unwarranted attacks on Ukraine.”

President Biden warned last Friday that if Russia were to use such weapons, there would be a “severe price” to pay.

To understand how chemical and biological weapons work, why they’re controversial, and the kind of destruction they cause, Yahoo News spoke with Daniel Gerstein, senior policy researcher at the RAND Corporation, an American think tank on global politics. He was previously acting undersecretary of the Department of Homeland Security. (Interview has been shortened and edited for clarity.)

Yahoo News: What is a chemical weapon, how does it work and what are some examples?

Daniel Gerstein: Chemical weapons, which we generally think of as materials derived from chemicals. But to be classified as a chemical weapon, we would also associate it with a dispersal device. When we talk about chemical weapons, we usually shorten it, and we have a number of families of chemical weapons that have always concerned us and are listed, if you will, in the Chemical Weapons Convention. We have things like choking agents, and that would include something like chlorine. The blister agents would be mustard gas. Blood agents: hydrocyanic acid. Nerve agents: such as nerve agent VX or nerve agent sarin. The one we’ve been hearing a lot about here lately is also a nerve agent called Novichok. This is the one that was used in the assassination attempt on Alexei Navalny [a Russian opposition leader]as well as Sergei Skripal [a former Russian double agent, and his daughter, Yulia] in the UK And then the latest, I should add a new column, and that’s the opioids, fentanyls, which we hear a lot about. [In the October 2002 Moscow theater siege by Chechen gunmen, it is believed that a gas based on fentanyl was used by Russian special forces that killed not only the attackers but hostages as well.]

Why are chemical weapons controversial and banned?

Throughout history, going back to the antiquities of people using toxins as poisons to commit assassinations and such, but more recently, of course, in World War I, we saw the horrific results, the mass casualties, well over a million people who have been killed using chemical weapons, primarily the types of suffocating agents that could include chlorine and phosgene. But the reason we proposed bans on the use of chemicals is because of their horrific use on the battlefield. And even as tools of assassination, as we have seen, or as weapons of terror. In 1993 we had a negotiation that resulted in the Chemical Weapons Convention. This convention entered into force in 1997, and it is the type of arms control agreement that limits, according to a list, the types of chemicals, chemical precursors and other materials that states can possess.

It’s actually a very tricky thing, because there’s a dual use of some of the chemicals that are on the lists. For example, some of the same chemicals that could be used to develop pesticides would also be very dangerous if used in a chemical weapon against humans, ensuring that the chemicals’ legitimate purposes can continue, while the illegitimate uses are prevented.

Another example we saw, [in] Interestingly, Syria uses not only nerve agents, but also toxic industrial chemicals, such as chlorine. Chlorine as a chemical weapon can be very effective. When it’s inhaled, it gets into the lungs, it combines with the moisture in the lungs, the water in the lungs, and it actually creates hydrochloric acid, which eventually kills the victim. We certainly want to think about banning the use of both chemical weapons themselves but also toxic industrial chemicals that could be used as these weapons of mass destruction.

What are biological weapons?

These are weapons that have been developed from biological material, and they are combined with certain means of dispersal to become biological weapons. There are really three categories we want to think about. The first are bacterial agents, the second are viral agents, then toxins derived from bacteria and viruses.

When we talk about bacteria [agents], many of us in the United States are familiar with the use of anthrax. Anthrax is a bacterial agent. In 2001, he was put into the messaging system by a series of letters, and he killed five people and sickened 22 others. Others that we talk about, throughout history, are things like the bubonic plague, Yersinia pestis. We also like to think of tularemia, or rabbit fever.

When talking about virality, a number come to mind. We could talk about smallpox, which has been a plague in the history of mankind, in fact — going back to the earliest days of man, we see evidence of smallpox infections. Ebola is another. Ebola is both dangerous as a natural disease, but it’s also interesting that there have been attempts to weaponize Ebola, marry it with a delivery system and use it as a weapon of mass destruction. . There are other viral hemorrhagic fevers that could be used as weapons of mass destruction.

When we talk about toxins, the one you’re probably familiar with, but more by name than scientific name, is Botox, or clostridium botulinum, which produces botulinum neurotoxin. Botulinum neurotoxin is a very lethal compound. If someone is infected with it, it can kill by preventing them from breathing, meaning they would either have to get CPR or mechanical ventilation or be on a ventilator until they leave their system. It is a very dangerous toxin. There are other toxins, such as staph enterotoxin B, that we thought of using when we had an old American offensive program. In any case, marrying the toxin and the vector or the bacteria or the virus would then create your biological weapon.

They are certainly banned under the Biological Weapons Convention, the BWC as we call it, [which] was negotiated in 1972 and entered into force in 1975. It is unique in terms of an arms control treaty. It is the first treaty to completely ban an entire class of weapons. The only way you can have these pathogens is if they are for the three Ps: for preventive, prophylactic or peaceful purposes. With biotechnology today, we see a lot of use for making vaccines, using, say, viruses. They have obviously been modified, but using viruses to be able to deliver an immunological response. There are reasons why you would experiment with this. For defensive purposes, you would want to have small amounts to be able to develop diagnostics and medical countermeasures and vaccines, but in terms of using it as a weapon, that’s absolutely forbidden. There are no circumstances in which this would be acceptable.

The Russians made a claim that we believe leads to a ‘false flag’ operation [an intentional misrepresentation to justify an action]that Ukraine might consider using chemical or biological weapons as a means of attack. [I] worked on the program [during the Obama administration] who administered what we worked with the Ukrainians, on what was called the Nunn-Lugar Cooperative Threat Reduction Program. It was a bipartisan program of Sens. [Richard] Lugar, [R-Ind.]and [Sam] Nunn [D-Ga.]. The intention was that after the dissolution of the Soviet Union and the [Berlin] The wall came down, all facilities and capabilities of weapons of mass destruction that had been developed by the Soviet Union (and after its break-up, in the former states of the Soviet Union) would be destroyed and … returned to purpose peaceful. If it wasn’t destroyed, scientists would find another way to work – perhaps in the same field – but instead of thinking about militarization, think about things like developing vaccines and medical countermeasures .

Our program was designed to go to those countries and find where they had done that work. In the case of biological material, we generally took what was available as a strain repository for the various strains of biological material, and placed them in a consolidated location, by western standards. In some cases, we have built laboratory facilities for them. In other cases, we just gave them equipment, newer equipment that would allow them to safely handle any pathogen.

And you can say, “Well, why would they need that to hold pathogens? Many countries around the world have some kind of endemic disease. It is very important to be able to maintain collections of strains for these diseases in order to do research, and to do all of this in a safe and secure environment.

Why is the United States on high alert after Russia’s misrepresentation of chemical and biological weapons labs in Ukraine?

Obviously, we are concerned from the point of view of a humanitarian catastrophe. We have seen the effectiveness [chemical and biological weapons] can be: literally thousands of people can be killed in a single attack. And with regard to chemical weapons, in particular, you can think of deployed chemical weapons, and there are people who are in underground bunkers in subways. They’re in basements, and the chlorine would actually settle in those areas and could kill huge numbers of people. When it comes to bioweapons, one of our big concerns should be this: if they attacked one of the facilities that had some of these pathogens that had been properly classified and stored, and then they were hit by ammunition, you could have these biological pathogens that have just been released into the open air. It could be very catastrophic.

There are important policy implications. Here you have Russia, which is a member of both the Biological Weapons Convention and the Chemical Weapons Convention. If they are conducting a false flag operation, they are crossing important non-proliferation red lines – and that is not something to be taken lightly. We don’t want to see a return to the use of chemical weapons or any use of biological weapons. It’s just abhorrent to humanity. And it shouldn’t be part of the battlefield repertoire.