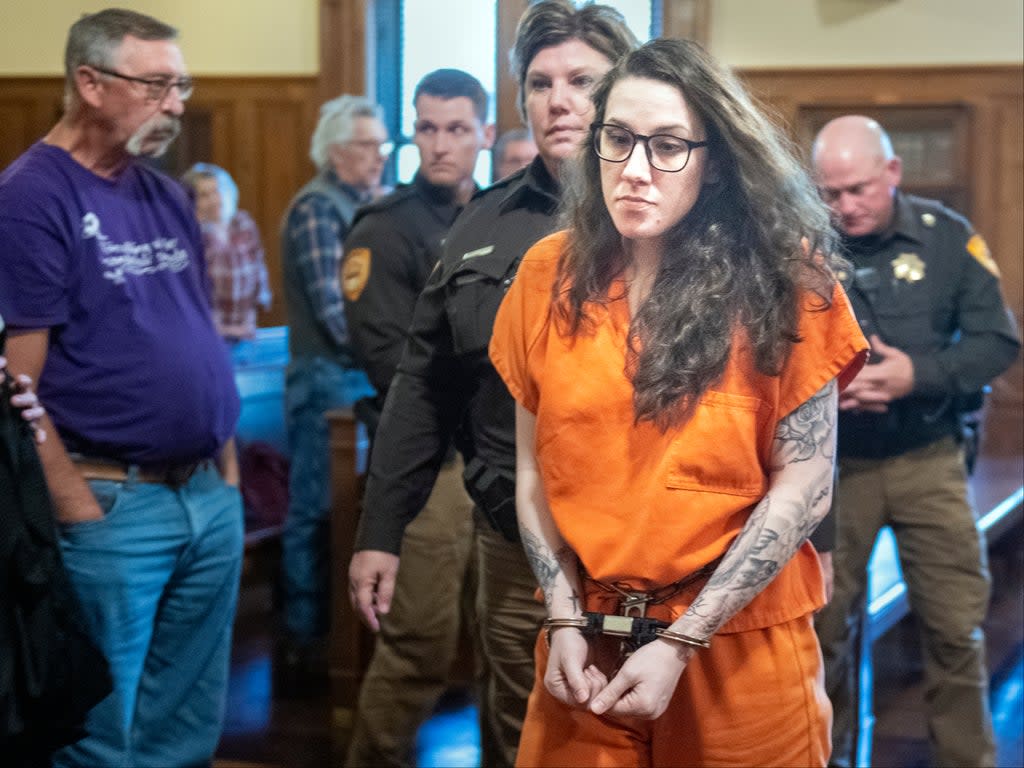 Bailey Boswell, a woman who lured a cashier to her house, then strangled her and cut her into 14 pieces, escaped the death penalty as she was sentenced to life in prison without parole.

Boswell avoided being the first woman Nebraska be sentenced to death following her conviction alongside Aubrey Trail for the 2017 murder of Sydney Loofe of Lincoln, the state capital.

A three-judge panel had the option of sending Boswell to death row, but chose not to, Douglas County Judge Peter Battalion saying state prosecutors had failed proved the aggravating circumstance of exceptional depravity in the murder, KETV7 reported.

Other judges Vicky Johnson and Darla Ideus believed the state had proven the aggravating circumstance, but the unanimity of the judges is required for the death penalty to be passed. The sentence was announced Monday in Wilber, Nebraska.

Prosecutors argued in June and July that Boswell should be sentenced to death because Ms Loofe’s murder was “particularly depraved and heinous”.

Judge Johnson said the murder was “coldly planned” which helped prove the death penalty was warranted. “Boswell coldly and deliberately chose Sydney Loofe,” she said. She cited the large number of cuts made to Ms Loofe’s body.

â€œThey are not there as the cause of the murder. These cuts testify to an exceptionally depraved spirit, â€noted Judge Johnson.

Ms Loofe’s remains were found in 14 pieces in a Nebraska farm field nearly three weeks after she went missing in November 2017. Parts of her body, including the heart and other organs, have never been found .

â€œMs. Loofe was needlessly mutilated by Trail and Boswell as part of the plan to satisfy her sexual desire. The mutilation was not done after the fact to hide the body, â€added Judge Johnson.

â€œHaving received and considered the evidence from both the State and the accused as the sole aggravating circumstance, as the State alleges, that the murder manifested exceptional depravity by ordinary standards of morality and intelligence, I do not I have not been able to conclude beyond a reasonable doubt that the State of Nebraska has discharged its burden of proof with respect to this aggravating circumstance, â€said Justice Bataillion.

“Nothing in this dissent should be understood as lessening the sentences for the murder of Sidney Loofe and the great pain it caused to his family and friends,” he added. â€œHowever, because I could not conclude that the State had met its burden of proof as to the aggravating circumstances. I hereby disagree with the other two judges on this panel. “

Prosecutors said Boswell and Aubrey Trail, 27, 55, bonded with Ms Loofe on an online dating site, with evidence suggesting they fulfilled a sexual fantasy during the murder.

The couple were recorded shopping for saws and other tools, as well as bleach, roasting pans and trash bags after Ms Loofe went missing.

Defense lawyers argued that Boswell was trained by Trail and should not bear the same responsibility. During the hearing, Boswell said she was sorry for Ms Loofe’s death.

Ms Loofe, 24, was last seen quitting her job as a clerk in Lincoln, Nebraska, in November 2017. Before she disappeared, she told a friend that she was meeting a friend called Aubrey from Tinder , KETV7 reported.

Boswell moved in with Trail to an apartment in Wilber in August 2017.

They discussed possible murders before and after Ms Loofe’s death. They were arrested in Branson, Missouri, two weeks after his death.

The independent and the association Responsible business initiative for justice (RBIJ) have launched a joint campaign calling for an end to the death penalty in the United States. The RBIJ has drawn more than 150 well-known signatories to its statement from business leaders against the death penalty – with The Independent as last on the list. We join top executives like Ariana Huffington, Sheryl Sandberg of Facebook and Virgin Group founder Sir Richard Branson on this initiative and are committed to highlighting the injustices of the death penalty in our coverage. .